Tagore’s work had from the very first moment a great impact on fellow poets and literature in general. Amongst the earliest translators are some who became themselves very famous as Nobel laureates, like Gide and Jiménez. Glimmering through the early reception of Tagore’s work, via his translators, is an opportunity to gain some insight in the world of cultural elites during the 1920s and 30s.

None of the early translators was able to translate directly from the Bangla original, with only a few exceptions like Helene Meyer-Franck. Also, some fame must already have existed, as for instance the composer Ciurlionis, who died in 1911, is said to have been influenced by Tagore. Song-Offerings was published in 1913.

Not a translator, but nevertheless very important, is William Butler Yeats (1865-1939), who advised Tagore in the publishing of his first bundle, Gitanjali, or Song-Offerings. Yeats wrote the introduction to the first edition. In 1923 he was himself rewarded the Nobel prize. 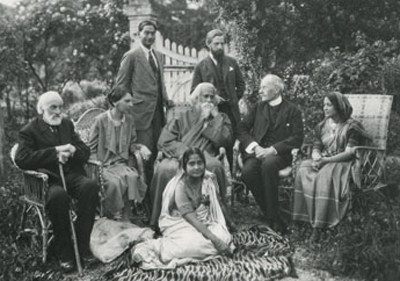 Many of the first translators were themselves part of the intellectual circles around Tagore, and knew him personally. Many also corresponded vividly with Tagore, and thus were able to discuss their translations with him personally. As an example, catching such an atmosphere, at right Tagore
is sitting in between his friend Romain Rolland and Romain’s sister Madeleine Rolland, their father at the most left (1926, picture from Collection Monique Dupont-Sagorin). This advantage did or does not befall later translators.

Amongst the earliest translators were almost none who could understand the value of the original Bengali texts. Though some did find in the power of Tagore’s English translations the motivation to start learning Bengali, like Helene Meyer-Franck. She originally translated from the English also was able to translate from the Bengali originals.

Of the later "modern" translators many are able to enjoy Tagore’s literary output from its Bengali original writings. No doubt this is also an important advantage. Though the original English translations made by Tagore himself still are of great value. Till this day, these early translations form the bulk of texts set to music.

Otto Mellies (1931) is a German actor. He has published several audio books on Tagore, like Am Ufer der Stille (Patmos, 2002), which uses a collection with the same title in Martin Kämchen’s translation.

This site uses Akismet to reduce spam. Learn how your comment data is processed.